Peter Leonard and Kate Fitzgerald are amazing skiers and their 50 km Sonot Kkaazoot victories Saturday were well-deserved. To many of us, just finishing the annual Sonot Kkaazoot is an accomplishment because of our increasing age and health-related challenges.

Among the SCUM organizers of the Sonot Kkaazoot, there were little internal achievements. This year, Byron Broda (who skis with two total knee replacements) beat Bad Bob Baker (whose heart stopped in June 2016 after winning his heat at the Jim Loftus Mile) to the 50 km finish line. Bruce Jamieson, who skied while undergoing chemotherapy had an endurance challenge shorter than that of  Chris Puchner (who is still recovering from a bout of pneumonia). Bruce and Chris both skied at World Masters in Switzerland as did Baker and Owen Hanley, all SCUM volunteers for Saturday’s Sonot Kkaazoot.

Ken Coe, the trail sweep at Birch Hill, followed me from the top of the Sonot Connector and I could hear him behind me as I departed the stadium for the last time, However, I surprised Bob Baker, the Chena River sweep, because I was no longer the red lantern. That was because the wind had picked up a little and Dermot Cole’s layers of clothing became an effective sail holding him back.  Thus, with my left leg cramping, I was able to pass him several km from the finish. 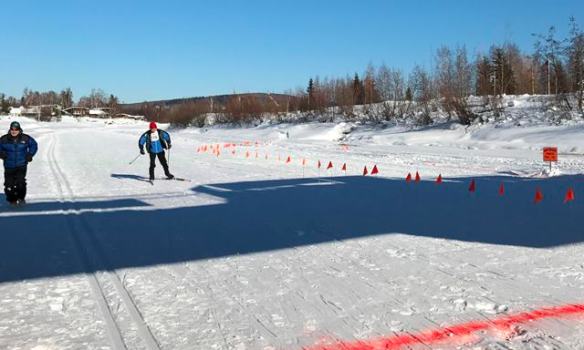 As the final two 50 km finishers, we got the best bargain on our entry fees (most time per dollar spent). We’ll be back next year. I hope that you will be, too.