Although so far, skiers have devoted from one hour to the better part of a day to their virtual Sonot Kkaazoot skis, the groomers have also been working. In the five days since the virtual Sonot Kkaazoot started, the Nordic Ski Club of Fairbanks (NSCF) groomers have spent 12.5 hours working on the trails. (Updated 3/24/20: 15 hours were spent grooming last night and today)

Bad Bob Baker, who uses his personal grooming equipment, has spent 32 hours grooming the Chena River, and an additional 10 hours checking out the river conditions and hauling equipment back and forth to accomplish his grooming.

This season, Nordic Ski Club of Fairbanks groomers have put 840 km on the piston bully and 1,300 km on the five snowmachines used for grooming. This is effort that allows skiers to train so that they are physically able to ski the Virtual Sonot Kkaazoot. As of 12 March, groomers had logged 832 hours of effort. They often do grooming chores during their own skiing time.

The condition of the groomed trails that we are skiing on now depends upon grooming all winter in addition to brushing and maintenance work done over the non-snow months.

Ski trails aren’t maintained by the borough, they are maintained with funds from Nordic Ski Club of Fairbanks donations and sponsorships. If you haven’t already done so, please donate to the NSCF trail fund so we can continue to ski this spring: 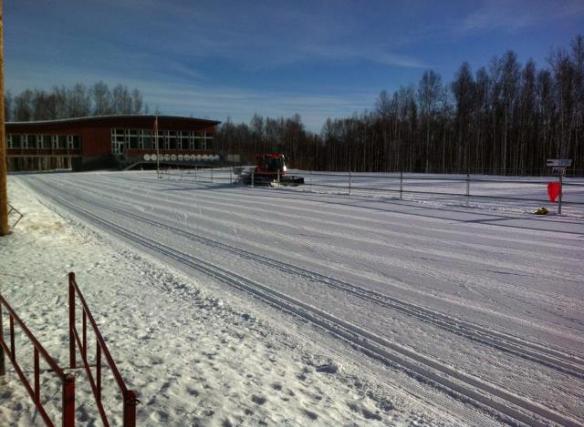 Trails groomed so that everyone can ski like a champion.

Most photos of NSCF groomers were taken by Eric Troyer, SCUM in charge of Sonot Kkaazoot media and NSCF board member, who is touring and Facebook coordinator. He is also the best-dressed SCUM at races.