The COVID-19 has kept the SCUM close to home this summer. To keep us from going stark crazy, we’ve been hill training in preparation for crushing whatever mountain is put in our path.

Masked and social distanced in the Birch Hill parking lot, we discussed the workout objective: ski walking three times up the Fort Wainwright alpine hill (on the trail under the chair lift). For extra challenge (and bragging rights), a SCUM could carry a 30 pound rock down and back up the ski hill (a trick we learned from Allen Doyle last summer).

We accessed the Fort Wainwright alpine hill from the Tower Direct trail so we had a 1 mile warm-up before we descended  0.84 km to our first hill climb start. Bill Husby carried the rock down from the bench at the top (where it has been stashed since last summer), and then demonstrated on the proper carrying technique up.

On hill repeat #2, Robert decided to carry the rock. He tried to use gravity to roll the rock down the hill. However, having been a philosophy not physics major, Robert and the rock disappeared into the nearby woods.

Robert did eventually retrieve the rock and carried it on hill repeat #2 being paced by Carl and Dan. 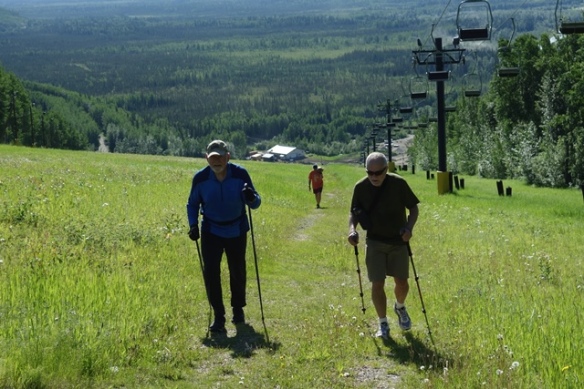 Carl was supposed to carry the rock on hill repeat #3 (Dan was exempt because he recently had shoulder surgery), but forgot his pack frame. So all the guys did hill repeat #3 with just their poles: 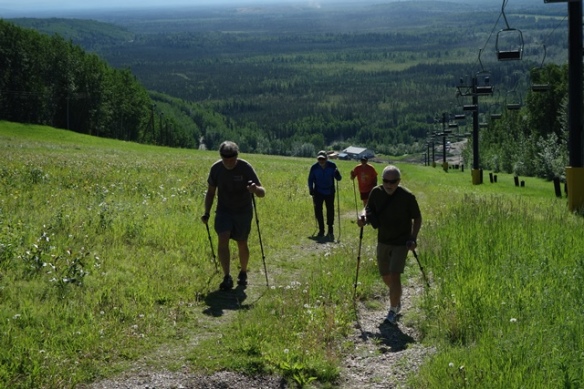 This 8.0 km workout had 625 m of ascent (and descent) under beautiful blue skies and a light breeze. During those hill repeats, we were temporarily relieved from the stress of grim national and state news, and concentrated on just putting one foot in front of the other without tripping. Even the mosquitoes seemed to ignore us on the FWW alpine hill.

We’ll do it again next Wednesday at 9:00 a.m. if you want to join us. The groans and sighs at the end will be the best of the entire day.