Just a reminder that early registration for the Sonot Kkaazoot ends at 5 p.m. on Friday, 27 February 2015. Register now and save some money.

Volunteers are needed for inside and outdoor jobs on race day and before. Just leave a comment on the “Volunteers” page and we’ll get back to you.

Bad Bob Baker, originator of the Sonot Kkaazoot, the guy in the orange in the banner for this blogsite, today finished the 55 km Classic Birkebeiner in 3:23.28 for 7th place in his age category (55-59 years old).

Even with the early and late month cold spells, January 2015 was 1.4 deg F warmer than normal as seen on this figure from the Alaska Climate Research Center:

So make the commitment (and save money) by signing up for the 2015 Sonot Kkaazoot now. Just click on the “register” tab on the top of this blogsite.

After the unusually warm early winter in Interior Alaska, the recent cold spell caught some of us unprepared and others just not acclimatized to the sub-zero conditions with a breeze that mixed upwards the cold air from the valleys. However, with the Sonot Kkaazoot rapidly approaching, it was time for a long overdistance ski on the south-facing classical loops off the Sonot Connector. Bill Husby (aka Poles), one of the Birch Hill groomers had personally tracked the Little Bird Trail allowing us to do a figure 8 involving the Black Hawk and Chinook Trails in a different sequence than any of us had skied previously. Thus, with skiers of varying speeds, it was important that all of us have a proper map that was provided by Poles himself as shown below:

Frank, our group’s writer laureate, read back the directions to all of us, while Dermot, the group’s historian, documented the map and directions as a video on his iphone. So off we went in search of sun and a little adventure away from the well-traveled trails on a breezy, chilly day.

Poles was leading the elite SCUM while Dermot, Dan, and I were clearly in the red lantern position even before Dan peeled off with under-performing electrical hand warmers. Once we entered the Black Hawk Trail, the “A” SCUM disappeared in the woods, and we were alone without so much as a squirrel on the trail. Where the Little Bird Trail intersected with the Black Hawk, we had two choices: right or left, so we headed right as it appeared to be heading downhill, which was the general way we were headed. It was also the longer of the two options so we figured if we had guessed wrong, the “A” SCUM would be returning in the opposite direction so we could then follow them. After some time of skiing and entertaining each other with ill-timed crashes into the soft snow on either side of the narrow trail, we worked our way back to the Sonot Connecter where we encountered a skier with a backpack, dog, and hard hat who was out for a different sort of adventure than we were. We skied down to the lower end of the Chinook Loop where we found Don who had just bailed from the “A” group who had left a tree marker on the Sonot Connector indicating the way they had headed (even further down the hill). Seeking warmth, we skied the rest of the Chinook and Black Hawk Trails that we hadn’t skied and then wandered back to the Birch Hill hut later than we had intended.

Lesson learned: a good map is essential to any adventure. One needs to make sure that the map is on a device that can be accessed even when the ambient temperature is colder than -20 deg F.

Speaking of devices, you’ll need a phone or computer plus a credit card to sign up for the Sonot Kkaazoot this year as all entries will be done online. See the register tab above. The deadline for early registration is 27 February 2015 at 5 p.m. A.S.T.

With early registration for the Sonot Kkaazoot ending on 27 February, it is time to test your endurance at longer distances. The Distance Race #2 has been rescheduled for Sunday, 15 February and will be 10 and 20 km classical technique. Here is the course: 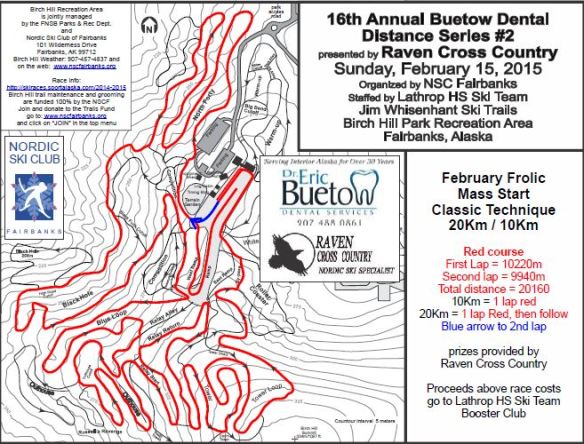 The 15 and 30 km Distance Race #3 in freestyle technique will be held Sunday, 1 March 2015 and will be a two or four lap course so you can get an idea of whether you are capable of holding steady pace over these distances. Here is the planned course:

Let the fun begin. Both races start at 11:00 a.m. and more details can be found on the Nordic Ski Club of Fairbanks website.