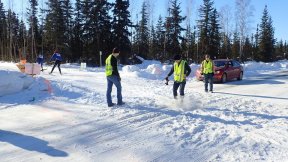 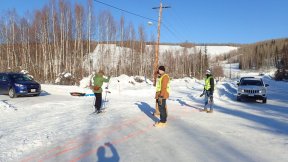 We urge skiers to thank their neighbors and Fort Wainwright personnel for their additional commitment to the greater Fairbanks North Star Borough community.(https://sonotkkaazoot.org/volunteers/). Without the partnership with Fort Wainwright, the Sonot Kkaazoot would not be possible.

We thank the coaches, skiers, and chaperones from Galena School and Anchorage’s Dimond High School for participating in the 31st annual Denali State Bank Sonot Kkaazoot. You are great ambassadors for your ski teams and communities. 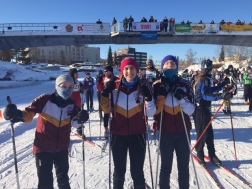 We hope that you return next year.

Everyone who does the Denali State Bank Sonot Kkaazoot is amazing, but for some people the challenge of the Sonot is apparently not enough. The Sonot took place on Saturday. The next morning at 8 a.m. saw the start of the White Mountains 100, a 100-mile multi-sport race in the White Mountains National Recreation Area just north of Fairbanks.

Three people who skied in the Sonot also competed in the White Mountains 100, which is truly amazing!

And one member of the Sonot Kkaazoot timing crew, who was on her feet a lot longer than it would take her to ski 20 km,
Tracie Curry, from Fairbanks, skied the WM100 in 26 hours, 39 minutes (seventh skier overall, third place female skier).
Thank you, Tracie.
Congratulations to Melissa, Forest, Peter, and Tracie!

Relive some of the glorious moments of the 31st annual Denali State Bank Sonot Kkaazoot captured by Mark Lindberg from the Chena River and from the warm-up loop at Birch Hill. I selected 32 that highlight the Sonot Kkaazoot course and some of the skiers who enjoyed the spectacular Birch Hill trails on Saturday. Many skiers tackling the 40 and 50 km Sonot Kkaazoot really look young to me. After 31 years, Bad Bob and I see a new generation of Sonot Kkaazoot 50 km skiers. 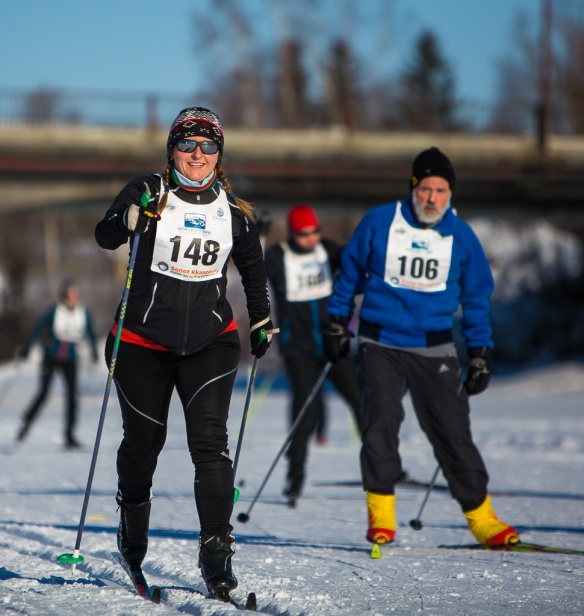 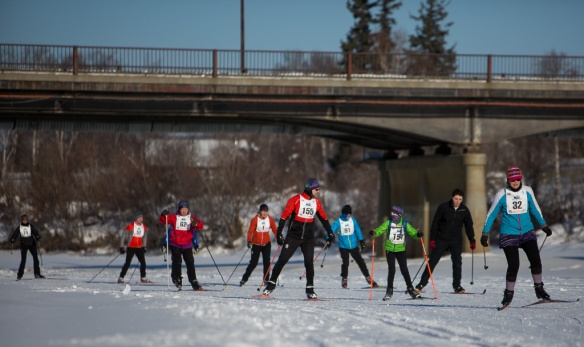 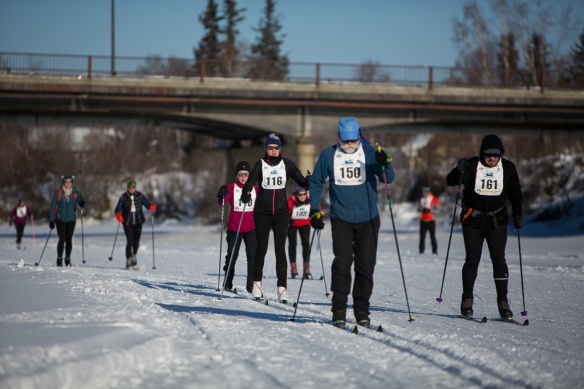 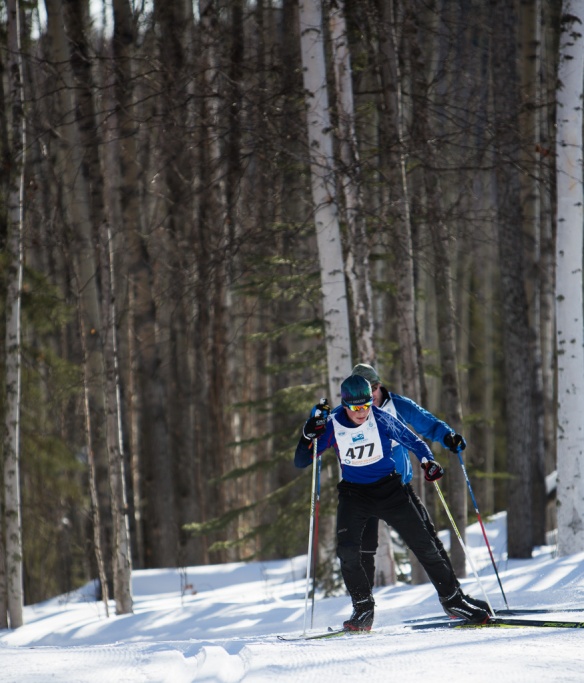 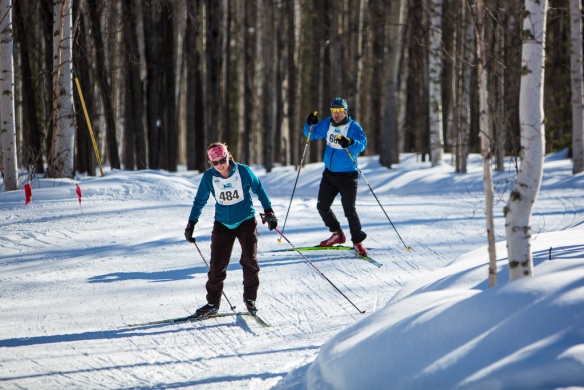 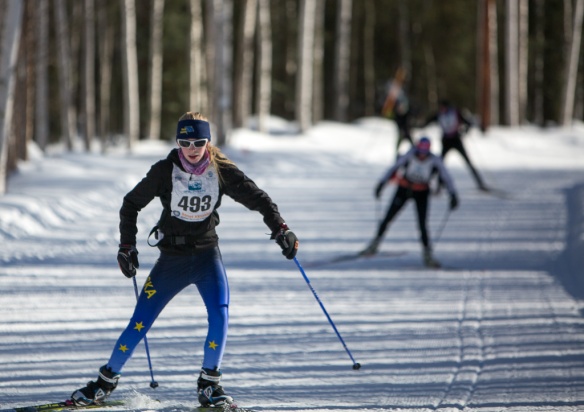 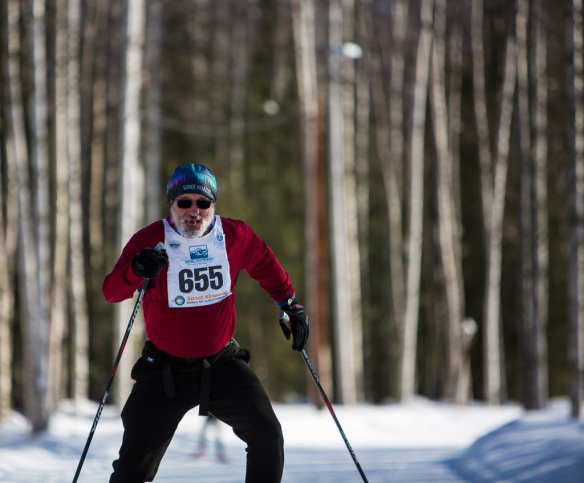 Mark took over 500 photographs during Saturday’s event. Many awesome photographs focus in on the faces of skiers. The original photographs are extremely high resolution.

If you want access to Mark’s photos, email him at mslindberg1@gmail.com and he can provide a google drive link.  These photos are slightly lower resolution than the originals and they are free to everyone.  He just asks that folks acknowledge his site if they use these photos.  If anyone wants to work with Mark on post processing and printing any original photos they should contact him about pricing.

Mark was extremely generous in providing me with the images that I have posted here in a form that this website could accommodate. It was hard to select a manageable collection from all the fantastic photos he took. 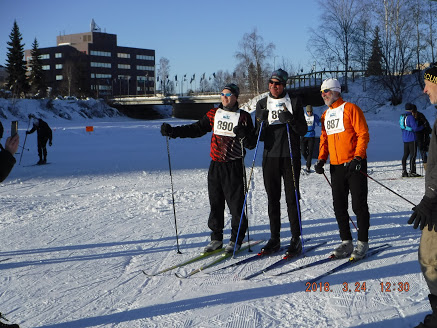 Classical SCUM at the start—All photos by Sam Lamont

Bad Bob not in orange 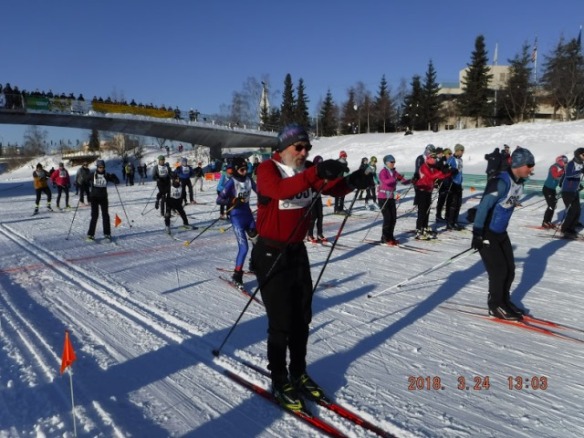 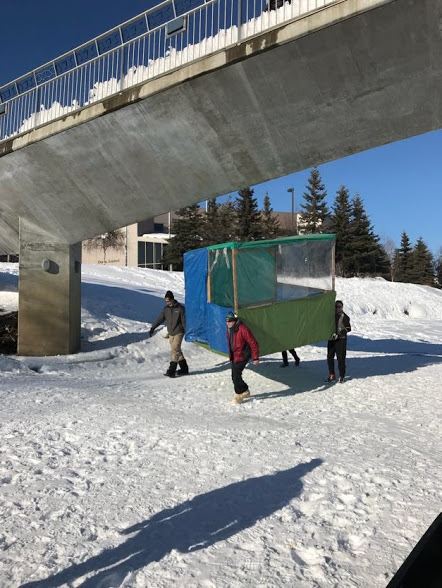 Mark Lindberg, sporting events photographer, was out on the race course yesterday.  He took over 500 photographs and 2 videos from the start of the 40/50 and 20 km events.

He has posted 14 edited photos on his Instagram site:

and we have posted 32 here:

If you want access to Mark’s photos, email him at mslindberg1@gmail.com and he can provide a google drive link.  These photos are slightly lower resolution than the originals and they are free to everyone.  He just asks that folks acknowledge his site if they use these photos.  If anyone wants to work with Mark on post processing and printing any original photos they should contact him about pricing.

Ti Donaldson (bib 620) skis between a sandwich of current Alaska Nanooks (his brother, Max in front, and Logan Mowry behind) —photo by Mark Lindberg Photography (https://www.instagram.com/marklindbergphotography/)

The women’s winner of the 50 km Sonot Kkaazoot was Sarah Freistone of Anchorage with a time of 2:54:42.3

Although woodels (age class awards) are not specific to specific year, the overall first, second, and third place awards in the 20 km, 40 km, 50 km, and 50 CL are specific to the 2018 Sonot Kkaazoot. So we would like to get these individually crafted awards into the hands of the awardees. Please check the provisional overall results and if you won an overall award and didn’t claim it at the Awards Banquet, please contact the Awards Maker, Mike Schmoker at: msfbc@ak.net and he’ll leave your award at the Birch Hill Recreation Area Building for you to retrieve or make other arrangements.

Photos from the 2018 Sonot Kkaazoot Fort Wainwright road crossings are available at the link below. The photos are free to download. If you do download, please donate to the Birch Hill Trail Fund (https://nordicskicluboffairbanks.wildapricot.org/Donate/). If you would like a larger version of a photo just send an email to Eric at fbxskierparent@gmail.com. He’ll ask again for you to donate to the Birch Hill Trail Fund, but he’ll send you a larger version of the photo(s) for free.

Corrections have been made in provisional results, and thus official 2018 Sonot Kkaazoot results have been posted: