The remedial SCUM headed toward the Tower loop for our normal Friday morning workout of multiple ascents of the Fort Wainwright alpine hill. However, today we were greeted with sunny blue skies and decided to take a different trail to the towers. En route, we encountered one of the Fairbanks North Star Borough Summer Trails Challenge signs. However, we were upstaged by a cute bear cub:

Not wanting to be accused of harassing wild life, the SCUM left the cub to his gymnastics and went on to do their three ascents of the Fort Wainwright alpine hill. Afterwards, wayward Robert signed the rock to document his rock carrying efforts from 17June.

Don’t you want to join the successful few who have carried the rock up the 0.83 km under the Fort Wainwright alpine hill chair lift? We’ll be back there again next Friday.

In an attempt to add a fresh challenge to our ski walking up the Fort Wainwright ski hill, this season the SCUM added carrying “the rock” that Allen Doyle (former Equinox Marathon winner and Sonot Kkaazoot skier) used to slow himself down when training with the SCUM last summer.

As reported here, Bill Husby and Robert Hannon were the first SCUM to carry “the rock”, previously estimated to be 30 pounds:

Several weeks later, Carl Hemming carried “the rock” up the hill in a backpack.

Because Carl is a retired Alaska Fish and Game fish biologist, we asked him if he had a fish scale that we could use to weigh the rock. Being a professional at estimating fish by eye, Carl didn’t need a scale. However, Dan Johnson, our retired nurse and EMT administrator had one and offered to bring the scale and a shopping bag to hold the rock to today’s workout. So before we did our 3 ascents of the FWW ski hill, we officially weighed “the rock” and it was lighter than all our estimates at a mere 20.2 pounds: 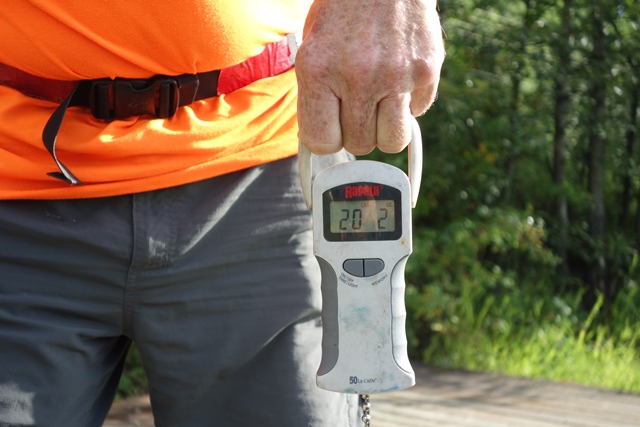 Bill was the only rock hauler that showed up for today’s workout and his estimate of the rock’s weight was the closest to today’s measurement (Carl was fishing and Robert was recovering from a tough night). However, the three gramps and I did three ascents of the FWW ski hill in the unfamilar sun today.

We walked up Beacon Road and down the Tower Loop to the Birch Hill parking lot where our four silver Subarus awaited us. 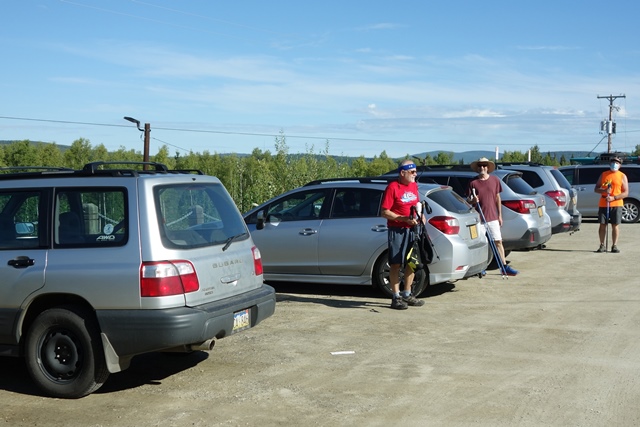 My car like my carcass was the oldest model at the workout today.

Join us on Fridays at 9:00 a.m. We also let skiers with blue and red vehicles to ski walk and carry the rock.

Without an Equinox Marathon in 2020, there’s no problem social distancing while ski walking on Ester Dome. Today Bernardo was so far ahead of me, I didn’t even see when he crested the top. 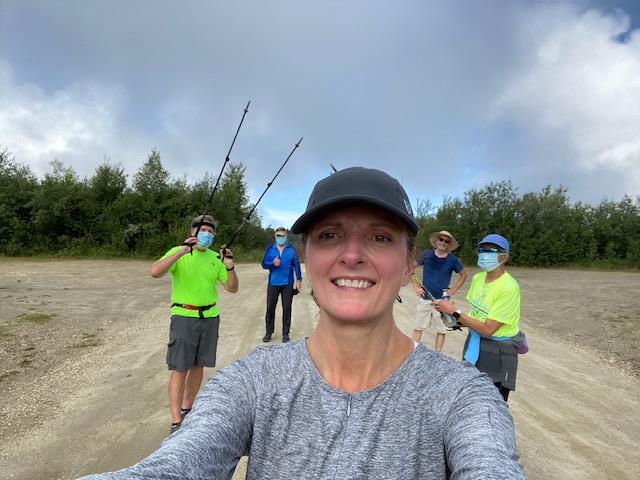 However, most of the SCUM still had their masks handy, just in case, we couldn’t social distance.

All photos by Joanna Fox

Enjoy ski training outside, but make sure you are well separated from your training partners while breathing hard on the uphills. We had no problem with a group widely varying in age and fitness. Today we were able to climb above the fog, but didn’t really appreciate the sun above Henderson Road until we were heading back down from the dome.