Please consider joining these female skiers (and those in the earlier gallery) who finished the 40 or 50 km events last year. Female skiers should make up more than 29% of the 40 and 50 km finishers. The 40 km event helped increase female participation in the longer distance events in 2013. Over the past 26 years, women have been roughly 20% of the finishers in the 50 km Sonot Kkaazoot. (All photos by Sam Lamont).

If you skied 50 km or more during the Ski Your Age event last Saturday, you probably need a new training challenge. You’ll have one if you ski the Buetow Distance Race #2, presented by Raven Cross Country. This 10 or 20 km classic technique race on Saturday, 4 January 2014, will have a new course this year utilizing some of the Outhouse and the recently “mellowed” upper Black Loops. Geographically challenged racers will want to make sure that they don’t get left behind in the colder regions of the Birch Hill Recreation Area. Here’s a look at the race courses: 20 km Distance Race_2013

Entry forms may be dropped off at Raven Cross Country and Beaver Sports through 5:00 PM Thursday evening. Entry fees are $15 for Nordic Ski Club of Fairbanks members and $20 for non-members.  Race day entries will be accepted between 9:45 AM and 10:45 AM Saturday, but will be $5 higher than the early entry fee.

More than 120 people skied just over 2,600 kilometers on Saturday at the Ski Your Age in Kilometers. The event, presented by Banner Health / Fairbanks Memorial Hospital (FMH), drew more than 120 people to Birch Hill Recreation Area ranging in ages from 78 to 7.

Josie Adasiak and Lucie Meyer, both 7, were the youngest participants who signed up. Carol DeVoe, 78, was the oldest. DeVoe and her grandson, Eric DiFolco, were the only grandparent / grandchild pair in the family category. They skied a combined total of 30 kilometers.

This was the tenth year of Ski Your Age, which is organized by Fairbanks Cross Country (FXC), the junior race-training program of the Nordic Ski Club of Fairbanks (NSCF). The event serves as a fundraising for FXC and this year raised just over $2,000.

“We really appreciate the support of Banner Health and Fairbanks Memorial Hospital for this great community event,” said Eric Troyer, FXC parent and event organizer. “After being cold all week, the temperatures warmed enough on Saturday to make it a lot of fun to be out on skis. It was awesome to look outside and see the trails full of skiers all day.”

The Birch Hill Cross Country Ski Center, owned and operated by the Fairbanks North Star Borough, was open for the event. People brought in food to share and the center was the focal point of the day.

“The skiers, especially those skiing their age or more, really appreciated the hot food and desserts,” Troyer said. “Many thanks to those who contributed and to all the volunteers.”

Five people met the 50-50 Challenge by being 50 or more years old and skiing 50 or more kilometers. Nine skiers met the Century Challenge, in which their age and kilometers skied equaled at least 100.

Max Kaufman was the only person to meet the Sunup-Sundown Challenge, which requires a skier to ski at least 50 kilometers between the official sunrise at 10:57 am and sundown at 2:49 pm. Kaufman skied 51 kilometers.

In the couples category, Corrine Leistikow and Eric Troyer skied the most kilometers at 109. They were also the only couple to reach a Double Century, in which the total age in years plus the kilometers skied equals at least 200. Leistikow and Troyer had a combined total of 216. (To be available as organizer of the event, Troyer skied on Friday.)

Longtime ski club members and volunteers Chris and Byron Broda created their own category by each skiing 20.5 kilometers, which combined equals the 41 years they have been married.

Full results as PDF can be found here: 2013 Ski Your Age Results & Story

Although Christmas is predicted to be somewhat chilly in the Fairbanks area, we hope that you will still find time to enjoy the holidays skiing with family and friends. Remember that the Ski Your Age event is happening this Saturday, 28 December starting at 10 a.m. at the Birch Hill Recreation Area.

Everyone has previous “work” experiences that fail to show up in professional resumes or curriculum vitae. In the spirit of the holiday, the Sonot organizers (aka the SCUM) share memories of their brief tenure as “tiny reindeer” for the Nordic Ski Club of Fairbanks (NSCF) Candy Cane event. After several young skiers were heard telling their parents that we “weren’t real reindeer,” the SCUM were forced back into reindeer retirement. Here’s why (photos by Dermot Cole and Mom): 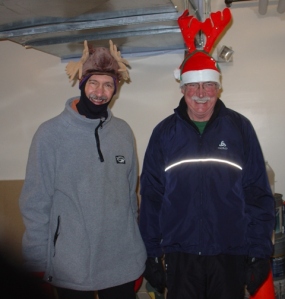 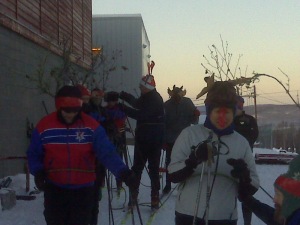 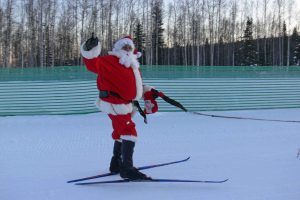 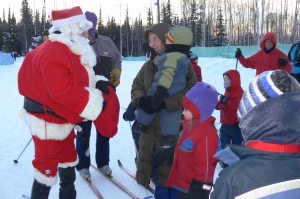 However, here’s hoping that Santa with real reindeer visits your homes tonight, and that you have an opportunity to enjoy this really special time of the year outdoors.

Saturday, 28 December 2013 is the 10th annual Ski Your Age (in kilometers) event and a great opportunity to burn off some of those extra holiday kcal that will be consumed. Right now the long-range forecast calls for warmer weather conditions  than those faced by Distance Race #1 participants. The Ski Your Age event is not a race but rather an opportunity to share leftovers and our wonderful Birch Hill trails with all your visiting friends and family members. There is no entry fee for the Ski Your Age but the event is a fundraiser for Fairbanks Cross-Country (FXC), the junior race program of the Nordic Ski Club of Fairbanks. Friends of FXC organize the event that officially runs from 10 a.m. to 4 p.m. with sign-up and food in the Birch Hill Cross-Country Ski Center (large new building).

On the following Saturday, 4 January 2014, the Buetow Dental Distance Race #2 will be held starting at 11 a.m. This race will be classical technique and gives participants the choice of 10 or 20 km distances. Raven Cross-Country provides door prizes to race participants whose names are drawn during the event. This is a good way to start off the New Year.

The first of the Buetow Dental Distance Series races presented by Raven Cross Country (thank you, Fred Raymond) will be held at Birch Hill Recreation Area this Saturday, at 11 a.m. The 7.5/15 km race is freestyle. Sign up for all the Distance Races and the Sonot Kkaazoot and save on registration costs. The Distance Races provide an excellent opportunity to ramp up toward the 40 and 50 km Sonot Kkaazoot.

In spite the second major wind storm of the season, the trail groomers will make sure that the course is awesome by race time.

Have you made your donation to the Birch Hill Trails fund yet? Here’s the link to do so online: http://www.nscfairbanks.org/index.php/trails/519-great-grooming-costs-money-donate-to-nscf-trails-now). Without donations to pay for equipment, fuel, and trained operators, grooming that leads to our fantastic trail conditions will need to be cut back.

Hope to see you on the trails soon.

For those Sonot Kkaazoot skiers who have a day (or night) job in addition to training, the holidays are a great opportunity to ramp up the skiing volume. However, variety is important, and challenging yourself on new trails keeps skiing fun.

Here’s an option to consider after skiing your age in kilometers on 26 December: drive down to Hatcher Pass, and ski the Mat-Su Icicle Double, 2.5 to 30 km classical on Saturday, 28 December followed by 2.5 to 30 km freestyle on Sunday, 29 December. With five different distances both days, your entire family could participate. Kids who are 13 years old or younger can enter free if one of their parents skis, too. All participants get a t-shirt, but if you finish the 30 km ski both days, you’ll get a pint-size beverage glass with the Mat-Su Icicle Double logo. There’s no mention of what beverage they’ll supply at the finish to utilize your new pint-size glass.

Here’s the link to the event information:

or contact Dave Musgrave for further details at: fbksdave@gmail.com