Please consider joining these female skiers (and those in the earlier gallery) who finished the 40 or 50 km events last year. Female skiers should make up more than 29% of the 40 and 50 km finishers. The 40 km event helped increase female participation in the longer distance events in 2013. Over the past 26 years, women have been roughly 20% of the finishers in the 50 km Sonot Kkaazoot. (All photos by Sam Lamont).

Editor’s note: soon this warm, brown October will become a new data point in the Fairbanks weather record books, and we’ll be able to start on-snow training for the 2014 Sonot Kkaazoot. In the meantime, this book report by Robert Hannon reminds us that training for a long distance event requires learning to deal with whatever Mother Nature throws at us. 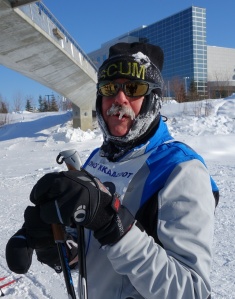 When I fell in with the ski training group known as the SCUM (Susan’s Class of Uncoachable Men, the current Sonot organizers), I naturally assumed there would be skiing and training. I have not been disappointed here. When nature provides snow, SCUM can pretty much be found out on it most hours of the day or night, even though we only meet officially once a week. Indeed, even in the protracted snow drought this fall SCUM were still out on roller skis, ski walking or running along trails in lieu of skiing. Also, Mother SCUM periodically emails us with links to training videos from Sweden and exhorts us to remember our core exercises.

What I wasn’t prepared for was a reading assignment. Now, I’m as literate as the next person. I glance at microwave instructions on frozen meal cartons, scan the urgent stickers on junk mail, and peer at road construction notices when driving. But you could have knocked me over with a heat gun set on low when Susan handed me a book this summer and told me it would help my skiing. I didn’t get what she meant at first.

The book was Bill McKibben’s Long Distance. McKibben’s name might be familiar to some through his efforts to document the steady rise of global temperatures and the reasons for and consequences of that rise. Long Distance is a more personal book. Like Dante before him, McKibben finds himself a bit lost in mid-life. He writes when he turned 38 he felt the limitations of age edging closer. Being a XC skier, he decided to give himself over for a whole year to train with single-minded intention and see where that took him. He secured the services of a professional coach and diligently followed his training plan.

Long Distance then is our ticket to follow the competent amateur McKibben as he works out, races and explores the world of professional Nordic skiing. He’s a wonderful guide. His style is funny, self-effacing but full of interesting bits of information. He also paints vivid scenes. One example: early in the book McKibben confronts a dramatic shift in weather on race day. Panicked by the bewildering alchemy of waxing, he scurries from trailer to trailer seeking advice from team crews who view him and his questions with darkest suspicion and mumble vague suggestions. You might as well ask an experienced Alaskan angler where the best place to fish lies.

Along the way, McKibben also puts XC skiing in the larger landscape of American professional sports coverage and why even during Winter Olympics our sport of choice barely rises into broadcasters’ awareness.  We hear from Swix and Fischer salespeople about the trials of marketing Nordic skiing in the U.S. Not content to leave it at that, McKibben compares our national indifference with the near mania Scandinavians feel for all things Nordic. It is enough to make you weep. We also meet top skiers and coaches and get a sense of what it takes mentally as well as physically to excel as an athlete.

All these points have been covered before by other writers on other sports. Indeed, many of the observations could be found in the Nordic Skier newsletter or on the Fasterskier.com website. What elevates Long Distance above other efforts to document the “inside world” of sports is McKibben’s own story, more specifically his relationship to his father.

Half-way through his training year McKibben learns his relatively young father has been diagnosed with terminal brain cancer. Thus, Long Distance becomes an “inside look” at an American family as it strives to make sense and cope with disease and death. To his credit, McKibben handles these scenes without heavy sentimentality. Applying the same eye for detail he gives to waxing and training he recounts the physical, chemical and radiation therapies his father undergoes as he retreats step by step to the end. We also see the toll this medical slog takes on the family.

In this way, McKibben earns the right to draw some revealing parallels between his father’s ordeal and what McKibben has learned about distance ski training. What might be cheap clichés about his father running the good race and endurance, become genuine insights into the relationship between ordeal and character in an average American life.

By the end of Long Distance I came to see why Susan lent me the book. Not being athletically inclined until my later years, I continually find it revelatory that pushing one’s limits physically, even a little, pays off emotionally. Finding out how one meets pain and fatigue in a long distance race, when conditions suck but there is only one way forward and that is the finish line, instills a sense of confidence when other annoyances come your way at home or the work place.  “Well,” you can say to yourself, “at least it isn’t the 2013 Sonot!”

Anyway, I handed back Susan’s copy of Long Distance a little wiser and happy in the knowledge that my own copy was on the way from Amazon.  I know I’ll be reading it again.

In the Fairbanks area, equinox is a time of rapid transition from light to dark and back again. It is also the time for our two marathon events, the Equinox Marathon (Ultramarathon, and Relay) held on the Saturday nearest the autumnal equinox, and the Sonot Kkaazoot held during the vernal equinox period. With the 51th Equinox Marathon successfully contested a little over a week ago, it’s time to start preparing for the 27th Sonot Kkaazoot.

For the first post for the 2014 Sonot Kkaazoot season, I wanted to focus not on the skiers who participate in the Sonot, but on the various race volunteers that make the event possible.

Because the Sonot Kkaazoot starts on the Chena River and then traverses on trails groomed just for this event, there are road crossings that needed to be staffed with volunteers who shovel snow over the road as cars pass by: 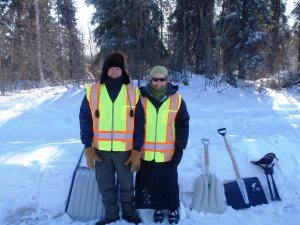 and direct cars and skiers at three different locations:

Not only do cars present risks to Sonot skiers, at the Fort Wainwright ski hill, the racers need to be directed away from alpine skiers, snowboarders, and those on tubes: 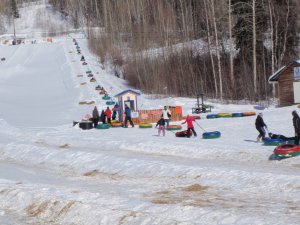 And someone has to organize all these people (and supply them with nifty visible vests) and Sam Lamont did that task (and took all the photographs in this post): 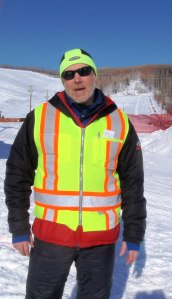 Feed stations were staffed by local high school ski teams and their parents except for the finish line that Bob Wilkinson staffed in addition to his efforts organizing the feed stations and the cleaning up the jugs after the event:

Organizing the start/finish area and providing commentary throughout the day was Kent Karns:

Dan Baker took on setting up the course and sweeping it after the race: 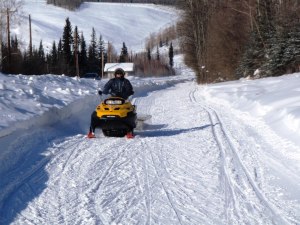 In between he took a lot of race photographs that should soon be available on his photography website:

Timers for the Sonot Kkaazoot are on the Chena River from the first start to the last finish. Here are the two intrepid members of the timing crew still at work when the last racer finished: 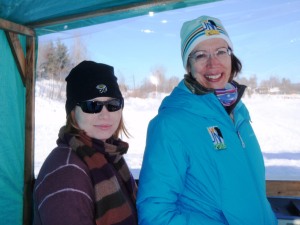 And then finally, there’s Bad Bob Baker, who worked with the 2013 Sonot organizers way more than he planned to make sure that the Sonot Kkaazoot continued beyond his tenure as race organizer: 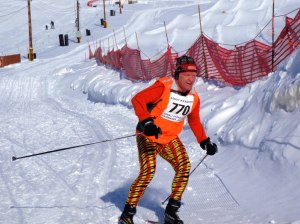 I hope that you’ll consider joining these volunteers for the 27th Sonot Kkaazoot on Saturday, 29 March 2014. Leave a comment and we’ll contact you.

The 26th Annual Sonot Kkaazoot is now history. 279 Racers braved the cold new snow and wind to finish one of the 4 Sonot Kkaazoot events. A HUGE THANK YOU TO OUR AWESOME GROOMERS who made the cold new snow a little more bearable. Tom Helmers was out on the Birch Hill trails at 1 a.m. race day. Russ Lizotte, Ken Coe, and Andy Blossy started at 6 a.m. setting new tracks on the river. Our race day volunteers put in very long hours in the cold, and we are sincerely grateful for their essential assistance.  OUR VOLUNTEERS INSURED A SAFE AND WELL-RUN EVENT AND WE CANNOT THANK THEM ENOUGH.

Bad Bob Baker is amazing and his contribution to this year’s event was remarkable.

50 km Classical Technique Sonot Kkaazoot winners: Tyson Flaharty and Corrine Leistikow. Although there were only 11 racers in this division, there were three medical doctors in this event.

Thank you to all participants. Please come back next year. Saturday, 23 March 2013 wasn’t normal spring equinox weather conditions. If you have any comments, you’d like to share or suggestions for improving this event, please leave a comment for us and I’ll contact you offline for details.

Fairbanks Daily News-Miner stories on the event by Bob Eley:

According to Bad Bob’s measurements as he set up the course for Saturday’s Sonot Kkaazoot,

so the 40 and 50 km skiers definitely got their money’s worth of skiing.

The course is all marked and set at Birch Hill…  Danny and I will set out markers on the River in the morning, and deliver the TIMING SHACK.   We plan to arrive on the River at 7:30am.   Tom, Russ and Ken plan to be to the start/finish area with the drags and track sled between 7:30 and 8:00 am.  Then we will follow them back up River marking,  and return before the race start.

Here is the 40 km course…same as 50 km thru the warm-up loop, then the 40 km goes straight up the MAIN RAMP and directly into the TOWER LOOP, where it meets back up with the 50 km   The 40km measures a hair over 40 kilometers, and the 50 km appears to be very very close to 50 kilometers.   Both courses follow the MEDIVAC loop.  Hopefully no one will be confused.